2016: UK-Bahraini Relations, First British Naval Base in the Gulf since 1967 (Timeline) 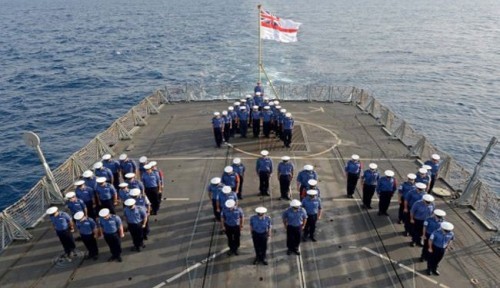 Press here to see the timeline

Bahrain Mirror: In 2016, the Bahraini Kingdom celebrated 200 years of diplomatic bilateral relations with Britain. This is preferred phrase used by the Bahraini government to describe the "British Colonialism" in the period prior to the independence. This was reflected in an increase in senior officials visits between the two countries as well as the arms sales, leading up to the opening of a British base in Bahrain, which is considered to be the first in East of the Suez since 1967.

The British Prince Charles opened in November 2016 his country's military base in Bahrain amid criticism against the support the Bahraini regime receives from the British government.

In December 2016, the UK Prime Minister Theresa May visited her country's naval base in Bahrain, on the sidelines of participating in the Gulf Summit held in Manama. May confirmed that "the United Kingdom is a supporter of the Gulf Cooperation Council (GCC) countries, and is keen to harness all potentials to maintain the security and stability of the Gulf region." "Gulf security is our security," she added.

On the military level, the Independent said that the UK has done deals with Bahrain worth £45m (approximately 21 million BD) throughout the past five years. Bahrain's Defense Minister Yusuf Al-Jalahma met in March 2016 with the UK Under Secretary of State and Minister for Defence Procurement.

Concerning military cooperation, the Independent stated in June 2016 that "the UK arms sales to governments listed by the Foreign Office as having dubious human rights records, including Bahrain, has increased to £3 billion."

However, on the security level, the British Morning Star website announced in October 2016 that the British police have advised their Bahraini counterparts on how to "whitewash" deaths in custody, international human rights group Reprieve alleged.

And on the judicial level, the Supreme Judicial Council head and Cassation Court president, Salim bin Mohammed Al-Kuwari, received in February 2016 the International Expert in Courts and Judiciary Management at the United Kingdom, Joy Coles, and International Expert Steven Logan who presented an executive plan that aims at achieving reforms in the judiciary. In March 2016, a delegation of the Bahraini judiciary members paid a visit to the UK.

With regards to economic ties, the British Secretary of State for International Trade Liam Fox visited Bahrain in September 2016 and met a number of officials to "discuss chances to increase cooperation in fields of economy and trade".

The close cooperation between Britain and Bahrain reflected the depth of relations between them. Bahraini King Hamad's attendance at Queen Elizabeth II's  90th birthday bash was strongly criticized in the media, as the BBC mocked him for being seated on the queen's right.

The Bahraini government managed to hold a celebration at the House of Commons aimed at whitewashing its human rights record, which was met with wide criticism. Conservative MP, Jack Lopresti is also accused of receiving thousands of pounds' worth of funding for foreign trips from the repressive Gulf kingdom's rulers.

Although Britain was expressing its concerns regarding the increasing number of capital punishments in Bahrain and urging it to adhere to its international and local commitments related to human rights, it considered that Bahrain has achieved some reforms, a statement which prompted Amnesty International to slam Britain.

Britain's close links with Bahrain and the nature of their relationship was clearly witnessed at the Manama dialogue 2016 event organized by Bahrain's Ministry of Foreign Affairs in cooperation with the International Institute for Strategic Studies (IISS), after a number of organizations revealed that the institution received secret funding from Bahraini royals which led the executive director of a leading British think tank to step down.