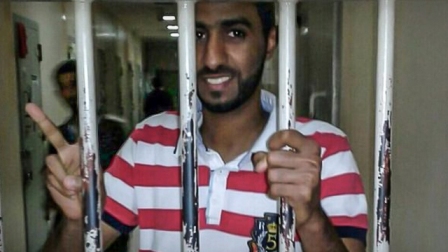 Press here to see the timeline

Bahrain Mirror (Exclusive): Al-Samie's family has always been subjected to endless accusations that did not end with the Daih bomb blast charges, and now has welcomed another martyr to their family. On Sunday (January 15, 2017), Abbas Al-Samie joined his uncle Taher Al-Samie who was martyred during the 1990s uprising in Bahrain.

Abbas Al-Samie was among the four dissidents, whose arrests were announced by the Bahraini Ministry of Interior on March 5, 2014, over charges of being "involved" in the incident that left three non-Bahraini security service men, including an Emirati national, killed in what was known as the Daih bombing case.

Only four days after their arrest, the Public Prosecution said that the suspects confessed to committing the crime. Al-Samie and the other suspects; however, stated in their first court hearing on April 30, 2014 that they were subjected to torture and sexual harassment, and forced to make incriminating confessions.

The court did not look into these statements and after a prolonged series of court hearings that lasted for about 10 months, the court handed down, on February 26, 2015, the death penalty to Abbas Al-Samie, Ali Al-Singace and Sami Mushaima', while sentencing seven others to life-imprisonment.

Commenting on the verdict, Al-Samie stressed: "It is mere ink on paper since it was issued by a court that lacks justice and integrity," adding that "anyone who has faith must believe that we will leave prison with our heads held high."

In a leaked video from inside prison, addressing the Emirati people on March 1, 2015, Al-Samie denied his or any of his friends' involvement in the bombing, stressing on his and their innocence. He further highlighted that he adopted peaceful activism in order to help achieve the Bahraini people's legitimate demands. "As we tossed roses at the authorities military men, they confronted us with their vehicles of suppression," he said.

On May 31, 2016, the Bahraini High Appeals Court, presided over by judge Mohammad bin Ali Al Khalifa upheld the death sentences issued against the three defendants, despite the international appeals to stop the execution of death penalties, which has increased in Bahrain. The High Appeals Court upheld the sentence again on December 4, 2016 after the Court of Cassation challenged it on October 17, 2016.

On January 9, 2017, the Court of Cassation refused to challenge the Appeals Court's decision again and upheld the death penalties, rendering the sentence final and enforceable.

The Court of Cassation had previously upheld a political death sentence on November 16, 2015 against Mohammad Ramadan and Hussein Mousa, who are accused of killing a policeman in Al-Dair.

Bahrain's King Hamad bin Isa Al Khalifa, who kept the death penalty card for himself, decided to pay back the United Arab Emirates, the island kingdom's second closest ally after Saudi Arabia, which generously supported the king on both military and financial levels. However, this time, the king did not have the courage to announce it in public and instead quietly approved the death penalties issued against Al-Samee', Mushaima' and Al-Singace, less than one week after the verdict was upheld.

In his last night and last meeting with his mother, Al-Samie declared in his will that "if Bahrainis want to achieve victory, dignity, rights and freedom, they have to stand against the oppressor, sacrifice their children and everything they own, and voice the word of truth in the face of the tyrant regime. None of these can be achieved without sacrifices [...] We only rose for the truth."

Al-Samie stepped out of prison with his head held high, as he sacrificed his life for freedom. He took his innocence with him to the grave where the executioner will be tried. Abbas was not paraded to his last resting place in a funeral procession fit for a martyr, yet his name will be forever engraved in Bahrain's history and remembered more than many others.